“Unquestionably the greatest of the many aids which Christ has provided for His people is the Sacrament of the Eucharist, commonly called the Mass - the most beautiful, the most wonderful, the most uplifting of the Christian ceremonies. It benefits not only the individual, as do the other Sacraments, but the entire world.” (from the Science of the Sacraments) 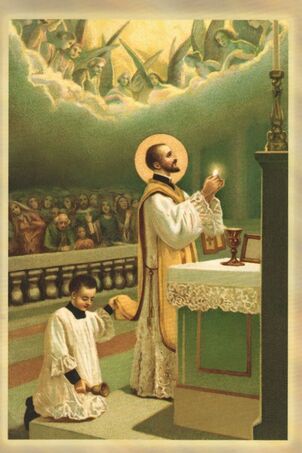 The tradition of offering Masses for others, particularly the deceased, dates back to the earliest days of the Catholic Church. Inscriptions discovered on tombs in Roman catacombs from the second century A.D. beg for prayers for the repose of the souls of deceased loved ones.
But today, offering Masses on specific dates in local parishes can be difficult due to crowded Mass intention schedules and fewer parishes.  The Liberal Catholic Missionary Mass Association can eliminate this challenge.

Please send us your intention or the name of the person or departed soul you want us to pray for and our priests will include those intentions for one month in our private celebrations of the Holy Sacrifice of the Mass.

This priestly association is consecrated to Our Lady in the Mystery of Her Assumption to Heaven  and our patron saints to whom we look  for heavenly help and guidance are Saint Jude Thaddeus, Apostle of Our Lord, Saint Vincent of Paul, Confessor and ideal of priests, and the Venerable +Charles W Leadbeater, bishop and teacher of the faith.

“Through the ceremony of the Eucharist, each time it is celebrated, there passes forth into the world a wave of peace and strength, the effect of which can hardly be overrated, and we can scarcely be in error in regarding this as the primary object of the Service, for it is achieved at every celebration of the Holy Eucharist, whether it be High or Low, whether the Priest be alone in his private oratory or ministering to a vast congregation in some magnificent cathedral.”
Venerable +Charles Webster Leadbeater  (The Science of the Sacraments)