The Guild of Our Lady of Llanthony 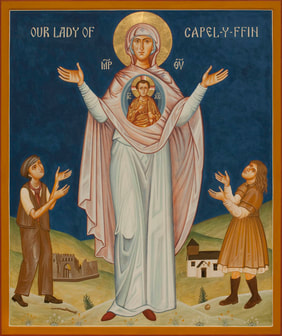 
Priest members of the Guild undertake to offer a Holy Mass each month for the intentions in the monthly list. All members undertake to remember these intentions regularly in their private prayers. To be enrolled in the Guild or to ask for prayers for a particular intention please use the contact form to contact Fr Paul CSR.


For us in the Holy Celtic Church International, Our Lady’s apparition to the children of Fr Ignatius of Jesus’ monastic house in the mountains of South Wales on 30th August 1880 is particularly to be treasured as a sign of God’s blessing on what became a pioneer independent Catholic Benedictine House in Fr Ignatius’ “Ancient British Church”. 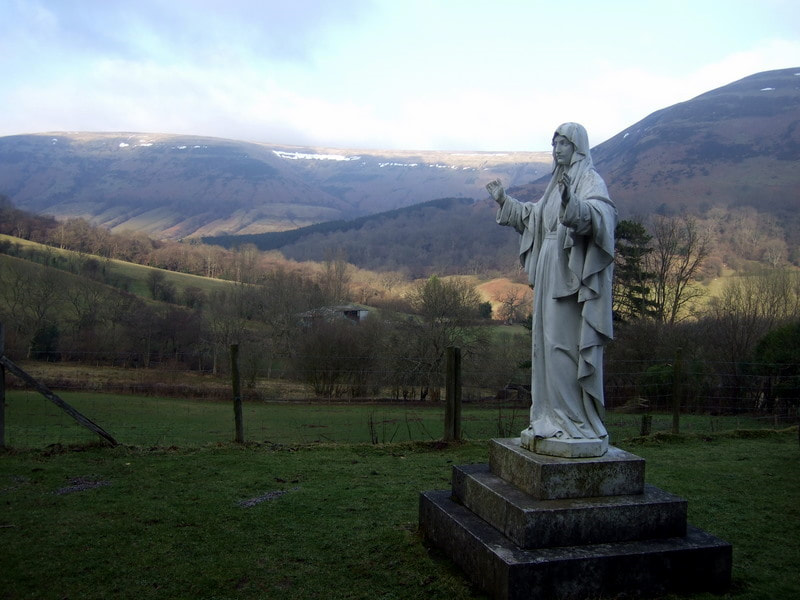 Statue of Our Lady of Llanthony at the site of the Apparitions at Llanthony Abbey
The Guild Prayer
O God, who didst bless the community of Llanthony with the Apparition of the Most Holy Virgin Mary; grant that all those whom we remember before Thee may, at her intercession, receive Thy blessing in this world, and in the world to come life everlasting. Through Christ our Lord. Amen

A Prayer in honour of Fr Ignatius of Jesus
O Lord Christ, who didst inspire Thy servant Ignatius with such a burning love for Thee that his face was made radiant with heavenly light; grant us, we pray, a share in that love, so that we too may come to be with him in Thine everlasting light. For Thy love’s sake. Amen.

"In the evening after Vespers, the choir boys were in the meadow playing and having a very noisy game. All at once, the noise of the game stopped and in a very short time, one of the boys came running up to my cell, soon followed by the others saying ‘Father, we have seen such a beautiful spirit in the meadow’. The eldest boy, who was fifteen years old, said he was certain that what they had seen was the Blessed Virgin Mary, As he was waiting for his turn to run in the game, he was looking towards some old ruined hut, and he saw a bright light over the hedge ,and the figure of a woman with hands upraised, as if in blessing and with a veil over her face coming towards him. He stood still and was much astonished and alarmed . The figure came almost up to him , and she passed close enough to him, to see the material of the garments that she wore. The figure passed off at right angles and stood in a bright light in a bush about fifty feet from the boy. The bush was all illumined in a phosphorescent light. The figure passed through the bush; and the light was there for some little time after the form had disappeared. The rest of the boys saw and described the same appearance.

I had all the boys in church, where I spoke solemnly to them and told them what an unlikely story it really was and that no-one would believe them, but they still maintained that what they had said was true, and a friend of mine, a lawyer staying in the neighbourhood, who interrogated them, said he was quite sure the boys believed they were telling the truth’

On Saturday night, September the 4th , the boys were out playing as usual, when all at once, the same bush became illuminated with a very bright light. For some little time they watched the light and then ran into the monastery to call out an elder brother, as I was away at the time.

Meanwhile a junior brother had come out, knelt down before the bush and had begun to say prayers and hymns. The boys were indignant because he was saying collects, which had nothing to do with what they considered the Apparition to be , and they said ,’Do not say those prayers,but say a ‘Hail Mary’ because we are certain it was the Blessed Virgin’. If we do, Our Lord will perhaps let the vision appear again!’.

When the senior brother came up, he agreed they should sing the ‘Ave Maria’. That instant the vision flashed again in a cloud of light in the same place where the boy had seen it on Monday. As they sang, the figure in the bush sent out rays of light , sometimes appearing behind and sometimes in front of the hedge , and sometimes coming straight up to the illuminated bush. When they came to the words ‘Blessed is the fruit of thy womb Jesus’ they saw the second figure of a man in a loincloth appearing in the light with his hands stretched out.

The boy who first saw the vision said he saw a cross behind the hands and saw the face distinctly ; whereas the brothers said there was a mist over the face and they could not discern any features, The face of he female figure was veiled as the boys had seen it on the Monday..

After this they watched for her and on several times they saw the same figure. I returned to the monastery on Tuesday September 14th and watched but saw nothing. On the 15th, between 8 and 8.15am we watched again. It was so damp that we watched from the monastery porch. Sister Janet, who was not allowed to come to the Monastery door went out into the meadow.

The boys were standing on the front step. I was standing on the top step. One brother was at my left, another at my right. Two farmers were behind in the back if the porch and an undergraduate of Keble College, Oxford. a little behind me to the right.

I suggested we should sing three’ Hail Marys’ in honour of the Blessed Trinity. Between them we were all amazed at some very curious flashings of light which we saw in all directions in the meadow, like the outlines of figures. I then said ‘Let us sing a Hail Mary’ in honour of the Virgin herself!’

Directly we began to do so, I saw a great circle of light flash out over the whole heavens, taking in the mountains, the trees, the enclosure, the Monastery and everything. The light flashed upon our feet, upon the steps and on the buildings, and from that one great circle of light, small circles bulged out and in the centre of the circles stood a gigantic figure of a human being, with hands uplifted standing sideways.
​
In the distance, this figure appeared to be about sixty feet in height, but as it descended, it took the ordinary size of a human. I saw distinctly the outlines of the features against the bright light, and also the exact form of the drapery from the sleeves of the upraised arms, as clearly as if it is possible for me to express.

It was all stamped with a most marvellous kind of reality, but I determined to say nothing of what I had seen to those about me, but to ascertain what they had seen.

After the vision had passed, I turned to the brother on my left amd said ‘Did you see anything?’. Yes indeed Father, he said. I said ‘Now tell me exactly what you saw’. He told me and it confirmed exactly what I had witnessed. The brother standing before me also confirmed what he had seen." 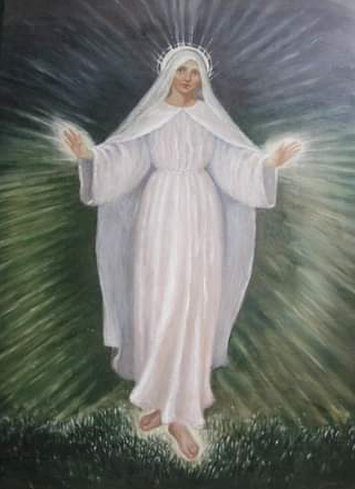 Our Lady of Llanthony pray for us!